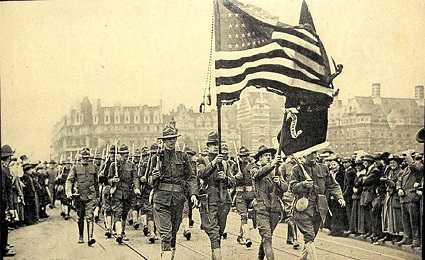 The Veteran’s Day we celebrate now was originally known as Armistice Day until 1954. The purpose of the holiday was to commemorate the end of World War I on November 11, 1918. Presidents often participate in ceremonies on November 11th at the Tomb of the Unknown Soldier, now the Tomb of the Unknowns, at Arlington National Cemetery, which is located across the Potomac River from Washington, DC. President Roosevelt attended Armistice Day events at Arlington every November during his tenure in office. Presented here are photos from four of those years from the Harris and Ewing Photograph Collection held by the Library of Congress.
1936

In 1936, General John J. Pershing joined FDR in paying tribute at the Tomb of the Unknown Soldier (Now Tomb of the Unknowns). As his schedule notes, the President “motored” out to Arlington at 10:45 AM for the 11:00 event.  General Pershing had served as commander of the Allied Expeditionary Forces in Europe during World War I.
Secretary of War Harry Woodring provided remarks, and Pershing placed a white chrysanthemum wreath on the President’s and the American people’s behalf at the foot of the tomb. A solemn crowd then heard a bugler play taps. The President returned to the White House at 11:45.

In 1937, the President was accompanied by his mother to ceremonies at Arlington National Cemetery.

In 1938, Roosevelt arrived at Arlington National Cemetery to commemorate the 20th anniversary of the end of World War I. He was accompanied by his military aides Captain Daniel Callaghan and Colonel Edwin “Pa” Watson.
Earlier that year, he’d signed a bill making Armistice Day a national legal holiday. The future Cuban dictator, who largely exercised control over Cuba at the time, Fulgencio Batista, also attended the ceremonies. Over twenty years later, he’d be overthrown by a young revolutionary named Fidel Castro.

More important than any other guests, even the President, were World War I service members and war mothers. One such veteran was Alex Stern, who lost his leg at the battle of Meuse-Argonne. Nearby, Mrs. Rosa M. Cawood, a war mother, takes a photo of President Roosevelt during the ceremony.

Armistice Day events at Arlington in 1939 were again a somber occasion to mark the sacrifices made by so many Americans, as well as their Allied counterparts, during World War I. That year’s ceremonies were held in the dark shadow of the new European war, which would ultimately become World War II. Acting Secretary of the Navy Charles Edison, son of inventor Thomas Edison, delivered remarks. 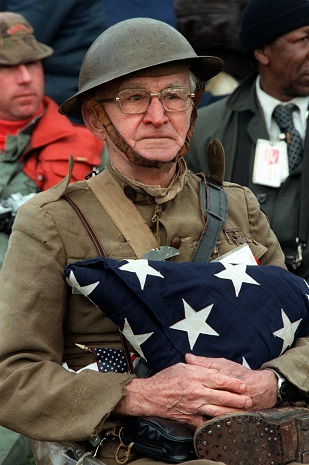 World War I veteran Joseph Ambrose, 86, at the dedication day parade for the Vietnam Veterans Memorial in 1982 Source: Wikimedia

November 11th is both a celebration of America’s Veterans and a commemoration of the Anniversary of the ending of World War I, once called Armistice Day, when the Germans, (the bad guys) formally surrendered to England and France (the good guys) in a railroad car at Compiegne, near Paris, ending the shooting.

The Versailles Treaty, in 1919, would finalize the details, which while called the War to End Wars, would only create new hatreds so that 20 years later, most of the same cast had built up enough strength to do it all over again, killing over 60 million that next time compared to the paltry 17 million lost in World War I.

I’m sure there’s a lesson there somewhere about laying down our lives for a our European friends, as France is filled with crosses where we laid down our lives twice, 1918 and 1944-1945. Only once was itr for the French, and that was in World War I.

America changed the name of the November 11 commemoration from Armistice Day to Veterans Day in 1954, since by that time and two more wars, the term “armistice” had a hollow ring to it for Americans. And for 64 years now, instead, we celebrate our living Veterans (that’s you) every November 11th, and Memorial Day for all our war dead, (including soldiers of the Confederacy), which used to be on May 30th. It was also called Decoration Day, so that families could go lay wreaths at the cemetery after church, which was always such a poignant sight in rural communities. In 1971 it was changed to the last Monday in May so that labor unions, then federal workers, could get a paid day off and head to the beach for a 3-day binge instead of going to church and laying wreaths. Those were simpler times, and many of you may not even know they even existed, but I have fond memories of attending a church on Memorial Day Sunday for several years in Kentucky, and sitting in Bachelors Corners  commiserating with the old vets.

In a manner of speaking, we celebrate Veterans Day here at Veterans Tales every week, for the stories we tell here are a celebration of America’s most exclusive fraternity of brothers and sisters known to mankind. We haven’t even begun to explore the great things veterans can do to save America.

But today I want to make a few comments about that first Armistice Day, 1918.

The same song Colin Kaepernick refuses to stand for was first played at a sporting event in Boston, in September, 1918, at the opening game of the World Series. It was to honor our troops in France. It then became a standard opening song all over the country, for college, then high school sports as well.

It was never proclaimed to be “The National Anthem” by Congress until 1931, which will give you some idea how far ahead of the government the people have always been in knowing what’s good for themselves especially in passing things onto our children.

Secondly, America in World War I:

America has not always chosen its wars wisely.

My generation will go to its grave debating the wisdom of the government policy that got us into Vietnam in the first place. I still think containing Communism is a good policy, but that sending a bunch of Harvard professors in to plan it wasn’t, and that we should have fought to win it, which we easily could have done, but chose not to, cynically cheapening the loss of many thousands of America’s treasure, while emboldening to the dangerous position they and their progeny now hold in our government today[…] 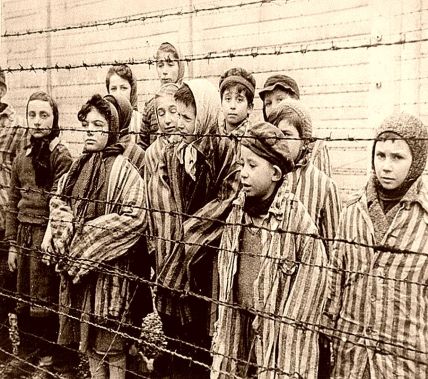 In contrast to the chaos that marked the evacuation and liquidation of Nazi labor camps in the final weeks of the Third Reich, the evacuation of Auschwitz was, for the most part, carried out according to plan by an SS apparatus that was still functioning effectively. As a result of this operation, the Nazi authorities managed to evacuate approximately 100 thousand prisoners and put them to work as slave laborers for the benefit of the German war economy. They also salvaged a large amount of the loot stored in the camp. About 7 thousand prisoners awaited liberation in the Main Camp, Auschwitz II-Birkenau, and Auschwitz III-Monowitz.

From August 1944 until mid–January 1945, approximately 65 thousand prisoners were evacuated. Among them were almost all the Poles, Russians, and Czechs in the camp (some 15 thousand people). They were employed in various industrial plants in the depths of the Third Reich at tasks that included the expansion of armaments plants in the Harz Mountains and in Austria. In the second half of 1944, the SS authorities devoted a great deal of attention to removing the traces and destroying the evidence of the crimes committed in Auschwitz. They stepped up their existing practice of destroying out-of-date prisoner files and registration forms, and began burning the lists of names of the Jews deported to Auschwitz for immediate extermination.

In September, October, and November 1944, the SS killed some of the Jewish prisoners assigned to the Sonderkommando that operated the crematoria and gas chambers, since they were direct eyewitnesses to extermination. A mutiny broke out on October 7, 1944, during one of the attempts to liquidate Sonderkommando prisoners, as a result of which more than 450 of them died fighting or were killed. Crematorium IV, damaged during the mutiny, was demolished by the end of 1944. Preparations were made in November and December of that year, on orders from Reichsführer SS Heinrich Himmler, to blow up the three remaining crematoria. Most of the technical installations in the gas chambers and furnace halls of Crematoria II and III were transported into the depths of the Reich after being dismantled. However, Crematorium V and its gas chambers remained in fully operational condition until the second half of January 1945….

While the United Nations has designated January 27th International Holocaust Remembrance Day commemorating the 70th anniversary of the liberation of Auschwitz, such a commemoration (as far as I am concerned) coming from an entity that is largely anti-Semitic, full of Holocaust deniers and holds animus towards the state of Israel is empty.

Because the United Nations spends 364 days a year attacking Israel while welcoming Israel’s enemies into the fold, their faux tribute is meaningless.

I remember my third grade teacher who one day when asked about the numbers on her arm above her wrist made every attempt to explain to her students the Nazis and those dreadful camps. Many of us (I for one) did not fully grasp what she was saying until many years later.

Unfortunately, the mistakes of the past have been forgotten or denied and are being repeated today throughout Europe, the United States and other parts of the world.

I urge everyone to watch the following video. In fact, share it. While watching it, one cannot help but the similarities between Germany leading up to the Holocaust and the fundamental transformation of the United States over the past seven years.

If Barack Obama and the United Nations truly wanted to make a difference, rather than collaborate with Israel’s enemies, he would nail Iran where it hurts to keep them from going after Israel.

At the same time, it is not lost on the world that while Obama negotiates with Iran whose primary agenda is to destroy the state of Israel and the Great Satan (USA), travels to India and then on Saudi Arabia, that neither Obama or Joe Biden will attend tomorrow’s 70th anniversary of the liberation of Auschwitz. Instead, Treasury Secretary Jack Lew in delegation of nine, some of whom are Holocaust survivors will attend.

For one who is so concerned about his legacy, Obama’s disdain for not only Benjamin Netanyahu but also the State of Israel has engulfed him to the point that he does not realize that because of his actions against Israel, history will be unforgiving and his legacy forever stained.

This post is for educational purposes only and contains only factual content. The world must not forget and for those who don’t know, they must be taught. Parents, teach your children. They are not learning about the Holocaust in schools. Teach them about atrocities committed that did not have to happen.

Instill in them that “The only thing necessary for the triumph of evil is for good men to do nothing.”

World War I montage **Posted by Phineas There’s an excellent (1) article by Victor Davis Hanson (2) on the lessons to be drawn from World War I, or, as I sometimes call it, the 19th century’s collective act of mass suicide. As this is the centennial year of the war’s start, we’re naturally seeing and will see all sort of books, articles, and programs about how it happened, whose fault it was, and what we can learn from it. Hanson’s article deals with the last. After reviewing the standard analyses regarding secret treaties, rigid mobilization plans, and a too-harsh […]