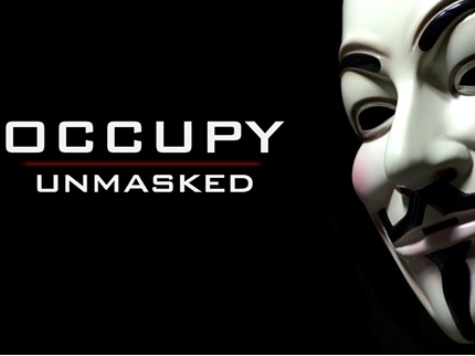 Received the following email and thought it worth sharing.

This week we announced that an advance screening of Andrew Breitbart’s film “Occupy Unmasked,” written and directed by award-winning director Stephen K. Bannon, will be shown at RightOnline on June 15th in Las Vegas. This explosive new documentary will be introduced by former Alaska Governor and 2008 Republican Vice Presidential Nominee Sarah Palin.

I could not think of anyone better than Governor Sarah Palin to introduce this explosive film that will rock the crazed Left to the core. I am happy that the people closest to Andrew will be the ones to see it first at RightOnline, it truly will be a great way to remember a conservative Icon.

“Occupy Unmasked,” takes viewers into the Occupy Wall Street camps around the country in New York, Los Angeles, Washington, D.C., Portland, Denver and Oakland for an up-close look at what’s happened there and who’s at the heart of the movement. Exclusive footage and first-hand eyewitness accounts tell the story of the criminal activity and raw brutality in the camps – much of which has not been reported by the mainstream media.

Featuring the late conservative icon Andrew Breitbart, as well as former leftists turned patriotic citizen journalists David Horowitz, Brandon Darby, Lee Stranahan, Pam Keys, Anita MonCrief, and Mandy Nagy, among others this film delves beneath the surface of the Occupy movement to show its anarchist roots, led by those who advocate the use of violence and intimidation as protest tactics. These tactics stem back to the anti-war protests of the 1960’s, the anti-nuclear weapons protests of the 80’s, the WTO protests and Environmental Liberation Front of the 90’s, and the IMF protests of recent years.

Go to www.OccupyUnmasked.com to learn more about the film and how to get your very own copy!

I received the following email from Rev. Jesse L. Peterson, President of BOND Action last evening and thought I would pass it on.  Please feel free to share and to sign petition. Thank you.

I’m writing you on behalf of BOND Action, a national nonprofit organization committed to “uniting the races with truth, instead of dividing them with lies.” In the aftermath of the shooting death of 17-year old Trayvon Martin by neighborhood watch volunteer George Zimmerman, we’ve seen racial tensions fueled by the New Black Panther Party, Rev. Al Sharpton, Louis Farrakhan, Rev. Jesse Jackson and others.

The New Black Panther Party has put a $10,000 bounty on Zimmerman’s life and have distributed flyers calling for his capture “dead or alive.”

The Department of Justice (DOJ) has recently been roundly criticized for being too lenient with New Black Panther members. In 2008, your department dismissed charges against one of their members and narrowed charges for another even after video surfaced showing New Black Panther thugs intimidating white voters with batons at a polling station in Philadelphia.

The decision to dismiss has led to allegations that this Department of Justice under the Obama administration is unwilling to prosecute blacks for civil rights violations and hate crimes against whites.

And now during the investigation into the shooting of Trayvon Martin, New Black Panther Party members have taken it upon themselves to seek vigilante justice by placing a bounty on George Zimmerman’s life.

As the leading law enforcement official in this nation, you know that every American is guaranteed due process and should be presumed innocent until proven guilty.

The New Black Panther Party is pouring gasoline onto an already inflamed situation in Sanford, Fla. Their bounty could motivate someone to murder George Zimmerman before the trial. This is a domestic terrorist group and they should be rounded up and arrested for federal civil-rights crimes.

In addition to the bounty, New Black Panther leaders have shown their propensity for violence and desire to incite a race war:

“Let me tell you, the things that’s about to happen, to these honkeys, these crackers, these pigs, these pink people, these —- people. It has been long overdue.” “…My prize right now this evening … is gonna be the bounty, the arrest, dead or alive, for George Zimmerman. You feel me?” She added later: “It’s in me to fight. It’s in me to raise up soldiers. It’s in me that every time my feet touch the ground [in] the state of Florida—these crackers—they scared.”

During your address at NAN you announced that the DOJ had opened an investigation looking into the shooting. You stressed that the department “will examine the facts and the law” surrounding this case. You also said, “If we find evidence of a potential federal criminal civil rights crime, we will take appropriate action….”

That’s encouraging to hear. On behalf of thousands of Americans of all races, I’m asking that the Department of Justice examine the facts and arrest The New Black Panther Party for civil-rights violations and hate crimes against George Zimmerman and the white citizens who are being intimidated in Sanford, Fla. We’ve launched a petition drive to demonstrate the concern and outrage of law abiding citizens regarding this issue (Insert link).

The New Black Panther Party has been emboldened by the Justice Department’s refusal to prosecute them for past and current crimes. They must be stopped now before their incitement to violence and bloodshed becomes a tragic reality in Florida and across this nation. Swift and aggressive action by your office would show that the DOJ is still committed to protecting the civil rights of all Americans, not just blacks, and that you’re seeking justice for all parties involved in this unfortunate case. I hope that you’ll do the right thing. The nation is watching.

“…Months into the Arab Spring, we realized that the Western powers, and the Obama Administration have put their support behind the new authoritarians, those who are claiming they will be brought to power via the votes of the people. Well, it is not quite so.

The Muslim Brotherhood, the Islamic Nahda of Tunisia, the Justice Party of Morocco and the Islamist militias in Libya’s Transitional National Council have been systematically supported by Washington at the expense of real liberal and secular forces. We saw day by day how the White House guided carefully the statements and the actions of the US and the State Department followed through to give all the chances to the Islamists and almost no chances to the secular and revolutionary youth. We will come back to detail these diplomatic and financial maneuvers which are giving victory to the fundamentalists while the seculars and progressives are going to be smashed by the forthcoming regimes.

In the US, there are interests that determine foreign policy. And there are lobbies that put pressure to get their objectives met in foreign policy. One of the most powerful lobbies in America under the Obama Administration is the Muslim Brotherhood greater lobby, which has been in action for many years. This lobby has secured many operatives inside the Administration and has been successful in directing US policy towards the Arab world. Among leading advisors sympathetic to the Ikhwan is Daliah Mogahed (Mujahid) and her associate, Georgetown Professor John Esposito. Just as shocking, there is also a pro-Iranian lobby that has been influencing US policy towards Iran and Hezbollah in the region.

One of the most important activities of the Islamist lobby in the US is the waging of political and media wars on the liberal Arabs and Middle Eastern figures and groups in America. This battlefield is among the most important in influencing Washington’s policies in the Arab world. If you strike at the liberal and democratic Middle Eastern groups in Washington who are trying to gain support for civil societies in the region, you actually win a major battle. You will be able to influence the resources of the US Government to support the Islamists in the Middle East and not the weak democrats. This huge war waged by the Islamist lobbies in America started at the end of the Cold war and continued all the way till the Arab spring. The two main forces of this lobby are the Muslim Brotherhood fronts and the Iranian fronts. According to research available in the US, the Ikhwan fronts such as CAIR (Council on American Islamic Relations), led by Hamas supporter Nihad Awad, as well as the Muslim Public Affairs Council, the Islamic Society of North America, and others waged their political war to block the representatives of Arab liberals and Muslim moderates from making their case to the American public. The Iranian lobby, exemplified by the National Iranian American Committee (NIAC), led by Trita Parsi, has been hitting at Iranian exiles….”

Once again, Obama’s policies are a threat to Americans and non-Muslims around the world.

Most assuredly, said policies will come back to haunt the USA.  In the meantime, Obama  seeks to appease Middle Eastern nations with American dollars.

The High Price of Telling the Truth About Islam (Please read this article through to the end, it takes quite an interesting turn and is definitely worth the read.)

Occupy DC has been given notice that they will be evicted from Mc Pherson Park and Freedom Plaza parks this coming Monday at Noon.

Took them long enough but then we should not be surprised when it comes to the federal government.  For more information, see ‘Occupy D.C.’ to be evicted on Monday.