I had the good fortune of meeting a retired Army Sergeant Major (E-9) named Frederic Barnett at a gym, where his son brings him for physical therapy. Mid-80s, uses a rolling walker, SGM Barnett is very affable and I approached the both of them and gave them the VeteransTales site address. I said I wanted to hear some of his stories, and would bring a tablet and let him tell some of them the to me and I’d write them up.

29-30 years in the service serving all over the world, he was itching to tell me about his first duty assignment, as an E-2 private, in May, 1953, when his unit, the 136th Ordnance Company, Special Weapons unit, was trucked from Ft Sill to Frenchman’s Flat at the Nevada Atomic Test Facility, to sit on the ground and watch an atomic fireball. Since 1951 the Air Force had been dropping bombs to test the for all sorts of effects on buildings and people.

But this was 1953, and they wanted to test a cannon, which shortly after this this test, would be deployed to Europe and serve as a mightly deterrent as the Soviets had not been able to build one.

It was called “Operation Grable” and this was the first and only firing of a nuclear shell from an artillery piece, the M65 280mm “Atomic Annie”. It was a 6.25 mile shot, air detonation at 200 feet[…]

LAS VEGAS – The Clark County School Board in Las Vegas is ignoring parents’ concerns and pushing forward with the possibility of including lessons on gender identity, sexual orientation in the district’s sex ed curriculum.

The board voted Thursday to explore expanding the district’s sex education curriculum for middle and high school students to include several controversial topics Planned Parenthood and the American Civil Liberties Union thinks are important, the Las Vegas Sun reports.

“I understand there are sensitivities for different groups of my constituents, but no student should feel as though they are not valid,” trustee Chris Garvy told the large public meeting at Las Vegas Academy….

The Clark County School Board spent about seven hours on a special public forum on the district’s sex education curriculum, primarily about whether to go to an “opt-out” format with “comprehensive” sex education – rather than the current “opt-in” abstinence-focused approach, the Las Vegas Review-Journal reports.

The question about “opt out” – which would provide sex ed to all students except those whose parents request otherwise – is irrelevant because state law requires parental consent for the lessons. The Tuesday meeting was called in part to gauge parental interest in lobbying lawmakers to shift to a “opt-out” system….

Wouldn’t you know it? The election season has not even ramped up good yet and Progressives are breaking election laws across America but have no fear America, Project Veritas’ James O’Keefe is on the case. 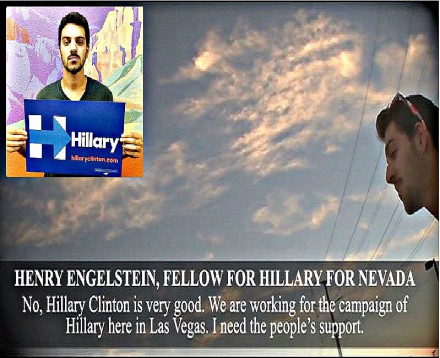 Staffer, Henry Engelstein (twitter handle: @hankdahama), an employee of Hillary for America Fellowship, Nevada can be seen on video making jokes and showing a photograph of Donald Trump to Hispanic voters which he uses as bait to lure them into registering to vote under Hillary Clinton’s campaign.

As expected, it is no longer funny once Engelstein realizes that he has been caught breaking the law. That, of course, would explain his attempts to make a hasty exit.

In this latest video from Project Veritas Action, Henry Engelstein – a Hillary for America Fellow, who in a previous video had boasted that he was chastised by a librarian for openly displaying a Clinton sign while conducting voter registration in the library, is captured on hidden camera illegally registering voters. As you can see in the video, the illegal conduct of Clinton campaign workers such as Engelstein is a recurring offense.

Henry Engelstein: “There’s like hundreds and hundreds of people, and I just flash a picture of Donald Trump on my phone and they all sign up.”

This thug should be in a prison alongside Hillary.

As Americans were preparing for Independence Day festivities, Nevada Sheriff Doug Gillespie late Thursday broke the news that in his view, rancher Cliven Bundy (above) “must be held accountable” for his alleged role in the Bundy Ranch Standoff.

The Nevada sheriff put it on record that he strongly disapproved of the Americans, many of whom are Oath Keepers converged upon the Bundy Ranch successfully thwarting the federal government’s efforts to confiscate Bundy’s land and feels that Bundy should “be held accountable” as a result.

While not demanding accountability of the Bureau of Land Management in its handling leading up to and during the Bundy Ranch Standoff, Gillespie stated that BLM “must reconsider its methods in order to prevent the bloodshed.”

… Gillespie said he spoke to Bundy many times in the months before the roundup. He said he made it clear to Bundy that, if his family was going to protest, it must be peaceful….

‘If you step over that line, there are consequences to those actions. And I believe they stepped over that line. No doubt about it,’ Gillespie said. ‘They need to be held accountable for it….’

Of course, who really stepped over the line continues to be a matter of opinion.

Thursday’s remarks by Gillespie segued to BLM announcing Saturday their agreement with the Nevada Sheriff that Cliven Bundy “must be held accountable’ while dismissing any blame for their role in the standoff and the mishandling of Bundy’s cattle.

‘…It is unfortunate that the sheriff is now attempting to rewrite the details of what occurred, including his claims that the BLM did not share accurate information,” she said. “The sheriff encouraged the operation and promised to stand shoulder-to-shoulder with us as we enforced two recent federal court orders….’

Rest assured that the timing of this news breaking while Americans are distracted with Independence Day festivities is no coincidence and now that it is on record that Cliven Bundy must be held accountable for his alleged actions, to give BLM cover for whatever comes next, we can expect Harry Reid’s brown shirts to make their move any day now. H/t The Blaze.

The Foundry by Alyene Senger

Nevada has become the latest state to announce it will concede Obamacare exchange enrollment responsibilities to the federal government via healthcare.gov.

Federal taxpayers already have sent about $4.9 billion total in grants to the states to establish exchanges, with almost $4.2 billion going to just the 16 states and the District of Colombia that had planned to operate their own exchanges in 2014.

Nevada received $91 million in grants and, as of April 19, had enrolled 45,390 people, for a federal taxpayer cost of $2,005 per enrollee. Cover Oregon, the exchange that was never able to successfully enroll one person online from start to finish, got $305 million in federal grants and had 68,308 enrollees, so its cost was about $4,465 per enrollee. Massachusetts’s per-enrollee cost was $5,648. Hawaii received $205 million in grant money and enrolled only 8,592 people, for an astonishing per-enrollee cost of $23,859.

Worse yet, in Nevada, the federal government is now spending even more money to transition their exchange to the federal exchange.

According to Nevada’s announcement:

“The federal government will pay all costs associated with transitioning from the BOS [Xerox’s health insurance enrollment system] to healthcare.gov. Nevada will not be required to pay a monthly per -member per-month fee to healthcare.gov for its use. The federal government will pay 90 percent of any costs incurred to disconnect Nevada’s Medicaid system from the BOS and to connect Nevada’s Medicaid system to healthcare.gov. The initial high estimates of this cost ranges between $15 – $20 million, of which Nevada must pay 10 percent.”

As with much of Obamacare, it remains unclear where this additional money will come from, what the total costs will be or whether other states are receiving the same deal.

In response to this this continuous steam of Obamacare exchange spending, Sens. Orrin Hatch, R-Utah, and John Barrasso, R-Wyoming, recently introduced a bill that would make states that choose to no longer operate their own exchange return the taxpayer dollars that were spent on the failed exchanges to the federal government. The legislation would require states to repay 10 percent of their wasted federal grant funding each year for 10 years. This would force Nevada, Oregon, and Massachusetts to repay a combined $575 million.

Reprinted with permission, The Foundry, The Heritage Foundation.