The first was an announcement by the feds that food stamps can be used to have groceries delivered right to a recipient’s door. Service with a smile. The Obama administration says it is too much of a hardship for those on welfare to actually travel to the grocery store. What’s next? Cooking the meal for them? If only the DMV would do home deliveries for drivers licenses….

The welfare/entitlement state of mind has spiraled out of control in America. No one is lifting a finger of opposition. The cost of welfare is now well over $1 trillion a year. Food stamps are so ubiquitous that they have replaced dollars as the new standard currency in many inner cities in America. Even in affluent areas with upscale grocery stores, food stamp recipients fill their carts with everything from cakes to lobster[…]

One particular comment beneath Zo’s video says it all:

…The black community is the most conservative group in America — on Sunday. Our great challenge is to ensure the message of individual salvation translates to one of individual liberty Monday through Saturday.

It is surely the message Dr. Martin Luther King preached.

We must promulgate this message of economic empowerment — not economic servitude — in our inner cities….. 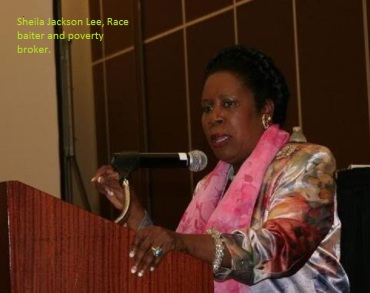 In a brief speech on the House floor Wednesday, Rep. Sheila Jackson Lee (D-Texas) hailed the war on poverty, endorsed government welfare programs, and said the “safety net has to be something for all of us.”

‘Maybe the word welfare should be changed to something of, ‘a transitional living fund.’ For that is what it is — for people to be able to live,’ she said….

“A line of Americans possibly looking for work.” No different than the fake picture Lee placed behind her a few years ago to give Americans the appearance that she paying a hospital to a senior citizen while pushing Obamacare. (See:  Sheila Jackson Lee – Insurance Cancellation Ltrs to 5M Plus Should Have Said Things Are Getting Better.)

If Progressives were truly serious about solving poverty, it would have been eliminated by now.  Instead they use entitlements to keep people enslaved while they themselves are filching the funding that go into these programs.

Jackson “Chia Pet” Lee does not want to address the problem of government dependency, she merely wants to see it flourish which is why she wants to re-label the “welfare” system to a “’a transitional living fund.”

That which poverty brokers push like drugs has nothing to do with transitioning of any kind.  It only ensures that they keep people down while the poverty brokers keep their jobs. Lyndon B. Johnson was no damned different.

A “transitional living fund” is nothing more than lipstick on a pig.

The War on Human Nature

…A therapeutic sense of self-sacrifice is fine in the abstract, but in the concrete such magnanimity causes far more harm to the innocent than does a realistic appraisal of self-interest and a tragic acceptance of the flawed nature of man. The theme of the present administration is that it possesses the wisdom and resources to know better what people should do than they do themselves…

Barack Obama continues to drag a nation, kicking and screaming, as if we were children in the height of a tantrum down a perilous path….There is only one end game to spreading the wealth, taxing the rich, class warfare….

mastadonarmy October 06, 2010 (follow @mastadonarmy on twitter) In a country, headed toward socialism, where the elitist few ran the government and did not govern for the people, but against them… In a climate of arrogant words, never before seen flippant attitudes, photo ops, fake news stories, and continued out of control rhetoric… In a time of rising debt, broken promises, increased taxe … Read More