I received the following email from Judicial Watch and thought I’d share it with you.

“Judicial Watch Scores Victory in Solyndra FOIA LawsuitJudicial Watch has been aggressively investigating the Obama administration’s corrupt deal to send $531 million in federal loans to the green energy boondoggle Solyndra, which is now bankrupt. In fact, we are in court right now fighting the Obama administration for the release of documents.And last Friday we earned a court victory when a federal judge refused to allow the Obama Energy Department to wriggle off the hook. According to Politico:
‘A federal judge has rejected a bid by the Obama administration to reject part of a lawsuit seeking documents about more than $500 million in federal loans to the failed Solyndra solar panel firm.In an order issued Friday (August 31), U.S. District Court Judge Rudolph Contreras declined to remove the Department of Energy as a defendant in the case brought by the conservative watchdog group Judicial Watch.The ruling (posted here) turned largely on technicalities relating to the steps one must take before filing a federal Freedom of Information Act lawsuit.'”

Just like Obama, Elizabeth Warren is a deceiver.  Cat out of the bag, we now know the real reason that Progressives love affirmative action.  It opened the door to swindlers like Warren.

Good grief, Doofus Wasserman Schultz is a horrible liar.  How can her constituents stand her? 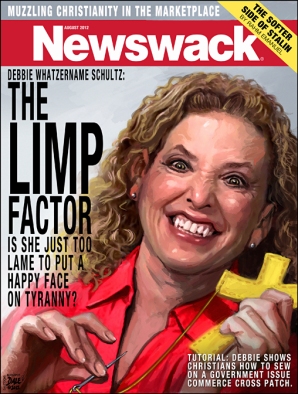 Debbie Wasserman Schultz attacked The Examiner for ‘deliberately’ misquoting her, but she didn’t count on them having audio.

Consummate liar, Wackerman Schultz first embarked on this week’s wave of deception Sunday morning on Fox News Sunday which led to her being called out and challenged repeatedly by FNC host, John Roberts.  Schultz refused to let go of the Progressive talking points and lies, as if her life depended on it.

Wasserman started with Mediscare talking points (all-untrue) and then moved on to Priorities USA.  It goes downhill from there with each lie becoming nastier than the last.

Knowing that she lied…..badly and fooled no one, hours later, little Debbie attempted to cover the deception by exacerbating it in a Tweet (screenshot below).

Apparently Schultz was never taught that it is in poor taste to cover a lie with another and then another and so on.

If you can stomach more, we will move on to —

Seniors and the disabled are forced to make such choices today and  if Obamacare is allowed to stand, it will only get worse.

After all, Obama is big on spreading the wealth and everyone paying their fair share and has stolen or is planning to steal $716 billion dollars from Medicare to pay for his pet project and Medicaid thus making seniors and the disabled sacrificial lambs.

“…Last week, a new Congressional Budget Office (CBO) report updated the amount of money Obamacare robs out of Medicare from $500 billion to a whopping $716 billion between 2013 and 2022….”

What is fair about that?

Btw, what is in the water at CNN?  Soledad O’Brien meekly called the liar out on her Priorities USA SuperPAC lie at 4:07 of video.

There is nothing more entertaining than to trap a despicable liar mid-lie and to observe their fraught efforts to carry on the deception.  Desperate to deceive, they instantly become flustered and blow it EVERYTIME.  Enjoy.

How can one justify deceiving others?  One cannot if one has any honor and integrity but Progressives lacking both will back a liar every time.

Americans are no longer buying it.  Thus, it is not going to be a good week for Progressives.