Is money from other countries shaping American education policy?

Do you ever wonder what’s driving this data-driven, education reform? It certainly isn’t coming from the parents or the teachers, those closest to the students. Teachers and parents seem to have lost all control of how and what is taught. Instead, it is a race to keep up with the mandated curriculum, mandated use of technology, and tests. This Race-to-the-TEST, is all about DATA and Return on Investment. (By the way, the tests will soon switch to online “Personalized Learning” which is code for hidden data collection in the form of computer based Competency Based Education and Assessments–asking for paper pencil options will be your best way to opt out.) It seems if you don’t have money, you don’t get a seat at the corporate education stakeholder table. So where is all that “corporate stakeholder” money coming from? We know that Bill Gates has invested Billions of this reform movement, as has Facebook’s Marc Zuckerberg, and all the edtech companies like Microsoft, Pearson, Google certainly have a $multi-billion seat at the table that is driving the use of technology and the American education agenda but what about other countries, like say…Russia? Could money from Russia be influencing American Education?

Did you know that the US government has a US-Russian collaboration on education? Ever hear of Skolvovo? 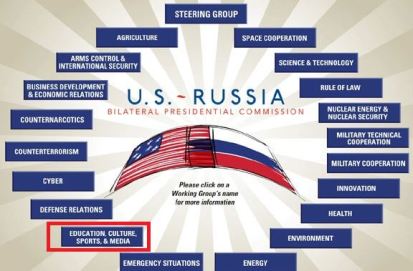 Following his 2009 visit to Moscow, President Obama announced the creation of the U.S.-Russia Bilateral Presidential Commission, which has a Sub-Group on education, seen here. The goal of the US-Russian education sub-group was among other things,

“we propose exchange projects for US and Russian scientists, scholars and university administrators that focus on innovation and commercialization of technology and research as well as the application of new technologies to education.”

However, apparently funding for this project has been halted due to sanctions against Russia. The website states, “In response to Russia’s ongoing violation of Ukraine’s sovereignty and territorial integrity, the United States has temporarily suspended several projects and meetings[…]

Continue Reading — Follow the Money: Does it lead to Russia and a Reset of American Education?

NOTE: Interesting post that trails back to Hillary Clinton’s State Department, the Clinton Foundation and that darned Russian reset button.  Definitely worth reading all the way through and sharing.  There’s plenty to digest but very much worth the effort.


The Guardian by Danny Hadron

Security researchers have found a flaw in the Smart Toy internet-connected teddy bear that used a child’s name, birthday and gender

Researchers found that the app connected to the Fisher-Price toy had several security flaws that would allow a hacker to steal a child’s name, birth date and gender, along with other data. Photograph: Fisher Price

In September, Mattel’s Fisher-Price brand announced it had partnered with a tech company to make Smart Toy, a stuffed bear that can learn a three-year-old’s name.

Researchers at Rapid7, a Boston-based security company, found that the app connected to the Fisher-Price toy had several security flaws that would allow a hacker to steal a child’s name, birthdate and gender, along with other data. The toymaker encourages parents to use the app so that the toy can better interact with children.

Fisher-Price has since fixed the issue, Rapid7 said.

In a statement, Fisher Price said: “We recently learned of a security vulnerability with our Fisher-Price WiFi-connected Smart Toy Bear. We have remediated the situation and have no reason to believe that customer information was accessed by any unauthorized person. […]

“We have remediated the situation and have no reason to believe that customer information was accessed by any unauthorized person.” That is, of course, until they find out otherwise or it becomes public knowledge.

Students attending the University of California received an email informing them or the requirement to complete a Title IX training course.

The online training course must be completed by February 9 in order for the student to register for spring courses.

While many students are concerned that the course is too intrusive, failure to complete the Title IX course would put their spring registration on hold until the course has been completed.

A mandatory online course at the University of Southern California (USC) asks students to disclose the number of sexual encounters they have had over the past three months and teaches students to ask for consent by saying “how far would you be comfortable going?” and “would you like to try this with me?”

Despite some students being uncomfortable with the content of the course, the campus-wide email assured students they would ‘enjoy the assignment.’

‘We believe you’ll enjoy the assignment, and that this training is in line with our shared belief that Trojans care for Trojans….

In other words, it is not up to the student to reach the conclusion that he or she enjoys (or does not) the course, the decision of which is to be determined by the thought police.

Students are right to be concerned that the information they are asked to provide is a blatant invasion of privacy and none of the school’s business.

Some of the Title IX survey questions ask: “If you had sex (including oral) in the last 3 months, how many times had you used a condom?”

The course interrogates the student about individual’s alcohol, drugs, sex including the number of sexual partners in a three-month period. Followed up by questions about the student’s use of condoms, “If you had sex (including oral) in the last 3 months, how many times had you used a condom?”

Such probing has little to do with the so-called concerns of sexual assaults on campus and more to do with data mining and usurping an individual’s right to privacy.

Below is Dr. Duke Pesta’s latest presentation entitled, “Common Core: From Farce to Failure.”
Published on Nov 11, 2015 by Mert Melfa

Dr. Duke Pesta is Academic Director of FreedomProject Education, a fully accredited, Common Core Free, online Classical school, built on Judeo-Christian values for students from Kindergarten through High School. As part of FPE’s outreach ministry, Dr. Pesta has delivered more than 350 talks around the country alerting parents to the Dangers of Common Core.

Another one of my conspiracy theories to hear others tell it has panned out. While people are watching their Smart TVs, the Smart TV reciprocates by watching the viewers back, especially if it’s a Vizio. Hah!

TV makers are constantly crowing about the tricks their smart TVs can do. But one of the most popular brands has a feature that it’s not advertising: Vizio’s Smart TVs track your viewing habits and share it with advertisers, who can then find you on your phone and other devices.

The tracking — which Vizio calls “Smart Interactivity” — is turned on by default for the more than 10 million Smart TVs that the company has sold. Customers who want to escape it have to opt-out.

In a statement, Vizio said customers’ “non-personal identifiable information may be shared with select partners … to permit these companies to make, for example, better-informed decisions regarding content production, programming and advertising.”

Vizio’s actions appear to go beyond what others are doing in the emerging interactive television industry. Vizio rivals Samsung and LG Electronics only track users’ viewing habits if customers choose to turn the feature on. And unlike Vizio, they don’t appear to provide the information in a form that allows advertisers to reach users on other devices.

Vizio’s technology works by analyzing snippets of the shows you’re watching, whether on traditional television or streaming Internet services such as Netflix. Vizio determines the date, time, channel of programs — as well as whether you watched them live or recorded. The viewing patterns are then connected your IP address – the Internet address that can be used to identify every device in a home, from your TV to a phone.

IP addresses can increasingly be linked to individuals. Data broker Experian, for instance, offers a “data enrichment” service that provide “hundreds of attributes” such as age, profession and “wealth indicators” tied to a particular IP address.

Vizio recently updated its privacy policy to say it has begun providing data about customers’ viewing habits to companies that “may combine this information with other information about devices associated with that IP address.” The company does not promise to encrypt IP addresses before sharing them.

Cable TV companies and video rental companies are prohibited by law from selling information about the viewing habits of their customers. However, Vizio says that those laws – the Video Privacy Protection Act and cable subscriber protections – don’t apply to its business.

Vizio hopes its new tracking forays will provide a boost to the thin profit margins it earns in the competitive television manufacturing business. In an October filing for an initial public offering, Vizio touted its ability to provide “highly specific viewing behavior data on a massive scale with great accuracy.”

Neustar declined to comment about the relationship, but said the company does not handle or distribute viewing information about Vizio users.

A spokeswoman for Tapad, a company that helps identify users across their many devices, said that its contracts prevent it from sharing the name of the companies it works with.

An Experian spokeswoman said, “We currently do not have a relationship with Vizio.”

The moment America’s children return to school after a summer break that never seems long enough, out pops those invasive surveys.

Macey France of Politichicks posted a screenshot of a survey/questionnaire Texas schools (rest assured it’s not just the state of Texas) are distributing to students for completion and return to the schools.

Invasive? To say the least and none of their business.

This appeared in Texas, coming home from school with a 7th grader.  Students were asked to ‘check all that apply toy and your fast realm of knowledge.’ A few of the questions:

‘My family has an online checking account and monitors bills online.’

‘During the holidays, my family hires a decorator to decorate the house….’