Remember that this morning as you head out to vote.  The nation, Americans has suffered and endured much under eight years of Barack Obama and we do not deserve the future that Obama has been campaigning relentlessly to regain.

Speaking of which, no way on earth did Obama build THIS!

Nancy Pelosi, the illusionist.  All smoke and mirrors so that the people can see…Oh wait, for that, “we have to pass the bill so that you can find out what’s in it.”

wait until the bill is passed.”

Even in this economy, Senator Mark Warner while campaigning for Leslie Cockburn tells his voters that Capitalism is not working. The, deceiver.  He’s talking to older voters and apparently believes that they have lost their senses.

When Democrats, correction Progressives, correction Communists take power, whether it is today or years from now, their primary agenda will be to resume Barack Obama’s agenda of burning the country, our economy and liberties to the ground leaving nothing but ashes even though it means that they must deceive their constituents to achieve the endgame.

THIS IS THE WAY, A TACTIC USED BY COMMUNITY ORGANIZATIONS TO WIN STEAL ELECTIONS.

Starting with the woman in the pink tutu (sp)

Then there is GA Democratic candidate, Candidate Stacey Abrams, who is running for governor.  Don’t do it, Georgia. Abrams is gunning for your First and Second Amendments although the company she keeps open carry what I believe to be are AR-15’s.

Note: Although exercising their Second Amendment liberties like their fellow Georgians that Abrams’ base of Black Panthers will never give up their firearms.

I hope that this does not become a repeat of 2008 when Barack Obama’s Black Panther supporters harrassed and blocked people from votin aka SUPPRESSED THE VOTE. Just in case you don’t remember, allow me to refresh your memory.

Before we move, let’s talk about the real racists in the room, i.e., PROGRESSIVES.

A little more than a month ago when during an event, Bingo correction Beto O’Rourke was questioned about his stance on illegal immigration.

O’Rourke’s response was racist and why the Communist media complex allowed this racist get away with it is beyond me.

O’Rourke saying to a Black man in front of an audience of obvious useful idiots that illegal aliens are needed to pick cotton.

Black student:  “My question is, do you support granting citizenship and American-paid benefits to illegal aliens who violated our country to come here, who fly their foreign flags here, who have citizenship in their countries and whose families did absolutely not build this country, while black people are subject to things that you explained before? You can answer yes or no, please.”

O’Rourke: (responding with the usual America is a nation of immigrants spiel stated)

“I mentioned going to the high school in Roscoe, I also went to the cotton gin in Roscoe,…and at that cotton gin, there are 24 jobs and the manager of that gin says it does not matter the wages that I pay or the number of hours that we set … no one born in Roscoe … or Texas or this country who is willing to work. But there are immigrants who are coming from Central America or Mexico or other parts of the world to Roscoe to work these jobs and to help build our economy.”

Wth? Cut the bull, O’Rourke was actually saying because “you people [meaning Blacks] won’t do it anymore.”

Nevertheless, O’Rourke’s statement was racist and a lie.

(i) For the record, Cotton Harvester machines that do that now. “Autmation” is the name of the game;

(ii) Even so, I suspect that in the eyes of Democrats, since there are machines to do the back-breaking work that Blacks have been deemed unworthy to work in agriculture because illegals equal a cheaper work force?  Still sounds racist to me.

In the meantime, Blacks (and other Americans) can move to where White Democrats always wanted us, back to the rear of the bus.

Can you imagine O’Rourke or any other Progressive saying such a thing to any other ethnicity?  This is proof Progressives have returned, correction resumed their old nasty habits, not that they ever stopped. It’s just that they are no longer performing under  the cover of darkness.  I’m talking about the return Jim Crow, KKK (Antifa), lynching (technologically), etc.

Just listen to Joe Donnelly.  They simply do not get it.

But wait, Mr. Foot in Mouth isn’t done yet.

Now on the subject of Andrew Gillum and Florida being a….”cracker state.”

Their primary Progressive agenda is to import a new voter base….PERIOD…and preferably from Communist nations to continue Obama’s planned transformation of the Republic easier.

Progressive can not win on the merits and so they spin and lie. They’re also hypocrites.

Obama attacked George Bush’s policies then took credit for them when it was advantageous to Obama. Enter 2018 and Obama, the malignant narcisisst (still) attacks President Donald J. Trump’s policies while trying to claim credit for the booming economic good news across the nation.

Then we have again, DNC Chair, Tom Perez, who as out of touch as his comrade, has a problem with the facts. Both Obama and Perez are pathological liars.

Regarding far left goon, Tom Perez, you might want to check out these two articles from Washington Free Beacon:

This is exactly what voters are dealing with as we go to the polls today.  Obama-style tactics.

Odd isn’t it, everyone is saying that today’s mid-term elections is more about Trump but so no one is mentioning how much of it it about Obama AND his precious legacy.

No Barack the pathological liar, you guy didn’t build this not even when Tom, non-truth teller when running the NLRB.

The risk of a split Congress, should the unthinkable occur such as Progressives winning the House?

So what do we have to lose, America?

As for what they are not telling us.

And then there’s the red diaper baby himself, Bernie Sanders.

And then there’s Ms. Alexandria Ocasio-Cortez aka Dumb as a Box of Rocks.

For New Yorkers who support this chickie are stupid. The stench of garbage, social justice and illegal aliens have rotted their brains.

Wake up, New York. You’re given away the keys to kingdom, dummies. Alexandria Ocasio-Cortez is fully aware which is why she has banned the press and has closed door campaign sessions.

SERIOUSLY — We are at war, America. Progressives and their collaborators/pundits that make up the Communist media complex have declared war on our nation, on its citizens and on our President. Today is the day to stand up, say enough. VOTE!

Message to Democratic voters waffling, free your mind and your soul: 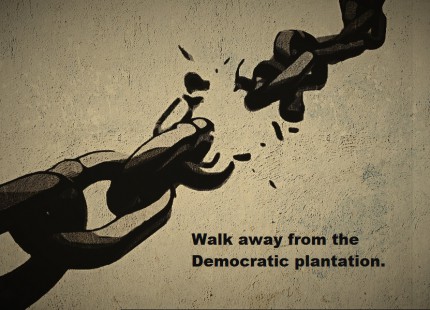 CAN YOU HEAR ME NOW?

One final note, from our friend, Vassar Bushmills, NEVER GIVE UP.