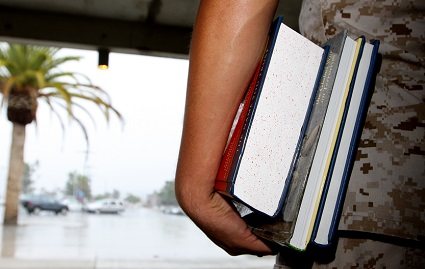 Every Veteran who has joined the American military since 1973 volunteered.

The 16-18 year-olds you will speaking to, from groups as small as a dozen, to classroom sized, even auditoriums as you get better known, may not be there voluntarily. Their parents probably sent them.

We’ve all been students in a class room. Think back. We had to be there. Certain rules applied as to how we could behave. But just like a horse to water, they couldn’t make us drink.

From middle school through college I had teachers and professors who clearly didn’t care whether I paid attention or not. That would show up on the tests. Marxists had developed ways by the 1960s to identify students in their class who were easy-pickings for recruitment over to their cause. I’ll tell you about those sometime.

But for now, just know that we all had teachers who inspired us, who made us think, and some even about the subject they were teaching us.

You will be a guest-speaker in the room for probably not more than an hour. Parents may also be there. But unlike school, those kids will likely not be there voluntarily, anxious to get to listen to Veteran simply because he’s a Veteran. 5th graders, yes, 18 year-olds, not so much. Some of their parents may have been Veterans, or had a relative that was a Veteran. It may have been a veteran’s group who set this speaking engagement up for you. We are pitching this program to them as well.

But the kids likely won’t be excited and they didn’t have a vote. Stand-up comedians call it a “hostile room”:

So when they sit down and you stand up it’s a blank slate. You have to get their attention.

First, just like a school teacher at the head of the class, or a preacher in a pulpit looming over the congregation, you have a certain degree of authority just by standing where you are.

Your authority comes from the fact that you are a Veteran, an American who has volunteered his or her service to the United States for a period of your life. You have postponed what they consider to be a regular life for one that required a lot of sacrifice and physical effort. You nay been shot at. You may even have been hit.

Bottom line, you’ve spent four years or more of your life to your country.