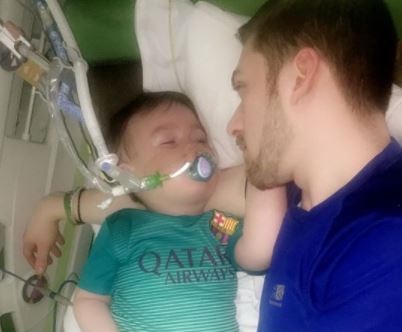 Little Alvie Evans died last night. A toddler child confined to a National Health Service Hospital; their dictates, their decrees, and finally, the throwing of the switch. Alfie isn’t the first notorious case the world is aware of coming out of England. Remember Charlie Gard? “Charlie Gard: A Society Which Loses its Humanity, Loses its Soul”

Alvie Evans’ story is another glimpse into what happens in a totalitarian Socialist State. It’s another example of outcomes when the State owns your healthcare and your life. Think about it. In socialism, the People are owned by the government, their everyday lives are affected, but worst of all, the government owns your body by being in control of your healthcare.

Joe Herring writes eloquently about Alfie Evans’ plight, “Another Child Sacrifice on Britain’s NHS Altar” published only hours before the baby’s death was reported, but he nails what’s wrong with Britain’s National Heath Service, and the dangerous outcomes of complete State control of your healthcare. In the cases of Charlie Gard and Alfie Evans it isn’t just the confiscation of their rights by the State, but Great Britain has taken the right to determine what is best for children out of the hands of the parents. The United Kingdom’s judiciary and National Health Service own the children, and parental rights have been extinguished.

Alfie Evans’ case is even more egregious than infant Charlie’s. In Alfie’s case there was more knowledge and aid available to assist him, from diagnosis to treatment, than in Charlie’s situation. Italy had granted baby Alfie citizenship and was standing by with an air ambulance to take Alfie to Italy for care. But that was not to be allowed – no escape from the British Kingdom of Socialism. Note that money was not an issue for Charlie Gard or Alfie Evans, both had either raised the funds needed for critical transport and care, or it was being given to them. It was simply a matter that the NHS wasn’t going to turn the babies loose[…]

1 thought on “Infanticide by the Socialist State; the Sun Sets on the British Empire”