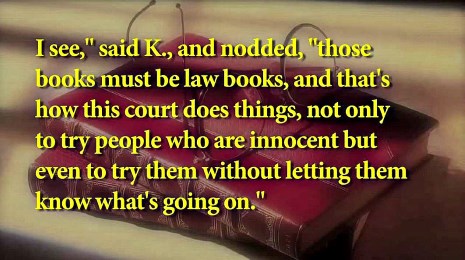 What are the odds that social media bias against Conservatives has elevated to the point that Twitter (and Facebook) used its algorithms to engineer a honey pot, minefield of alleged Russian bots to ensnare Conservatives?

Why? To pave the way for Twitter (and Facebook) to purge Conservative accounts before the 2018 mid-term election season kicks into high gear and the 2020 presidential election season?  It is possible that I am overthinking this but I doubt it.

Before you read any further, note that I am not questioning the events that occurred last week in Parkland, Florida but I am questioning the players who in their manipulation of the victims and the families are doing what Progressives do best, i.e., never letting  a good crisis go to waste.

As a result, Twitter locked out and/or suspended thousands of account under the guise that the accounts were Russian bots who for several days now tweeted and retweeted under the hash tags #guncontrolnow, #Parklandshooting, #gunreformnow, #DavidHogg and #CNN.

In the wake of Wednesday’s Parkland, Florida, school shooting, which resulted in 17 deaths, troll and bot-tracking sites reported an immediate uptick in related tweets from political propaganda bots and Russia-linked Twitter accounts. Hamilton 68, a website created by Alliance for Securing Democracy, tracks Twitter activity from accounts it has identified as linked to Russian influence campaigns. As of morning, shooting-related terms dominated the site’s trending hashtags and topics, including Parkland, guncontrolnow, Florida, guncontrol, and Nikolas Cruz, the name of the alleged shooter. Popular trending topics among the bot network include shooter, NRA, shooting, Nikolas, Florida, and teacher[…]

Twitter’s Deep State Alliance – Control the Narrative By Any Means

I suspect that it was the tweets about alleged Marjory Stoneman Douglas High School student, David Hogg, who many suspect is a crisis actor or at least not who he presents himself to be that sent Twitter over the edge.

Hogg is also the son of a former FBI agent as well which in this day’s climate and the findings of this nation’s beloved deep state only served to raise more questions about Hogg’s agenda.  The fact that he is well-scripted and fake news CNN’s favorite does not help.

…One video that has frequently been posted online is a video of Hogg forgetting what he was saying mid interview:

…Hogg and his father went on Anderson Cooper’s show to dispel the rumors.

Yeah, sure. What better way to prove one’s legitimacy than to plead one’s case on America’s premier fake news channel, CNN and to be interviewed by, of all people, CIA operative and front man, Anderson Cooper with one’s father, a former FBI agent by his son’s side.

Dog whistle for “Who are you going to believe? Me, or your lying eyes?”

Determined to silence the voices of Americans unwilling to give up their firearms, the Second Amendment, not buying a narrative that has been repeatedly shoved down our throats the past nine years, Twitter locked down and/or  began purging (a) thousands of twitter accounts and (b) their followers.

Why?  To control the narrative.

What else did these accounts have in common?  Many, correction, the majority from what I can tell are legitimate Conservative twitter accounts belonging to those who called out the dog and pony show.  Enter this Wednesday morning: #Twitterlockout which began trending this morning.

If you noticed, MicroMeatPatty’s Russia location, as “Moscow, Russia,” allow me to point out that left-wing accounts who tweeted under the same hashtags and appear themselves to be a bot, if not Russian bot remain untouched. In fact, I found at least one other account that appears to be a Russian bot or troll, location “Krasnoyarsk Krai, Russia” that as of this moment that is still live.

Meet LaGunaBeachAntifa9 (@LagBeachAntifa9), a Progressive “Russian bot” or so he claims. 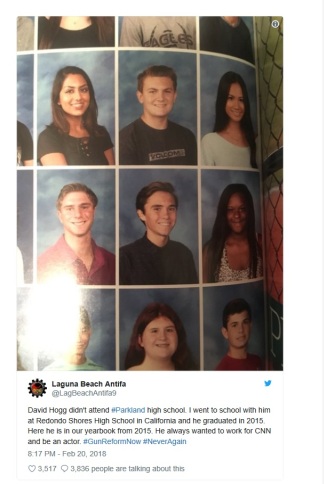 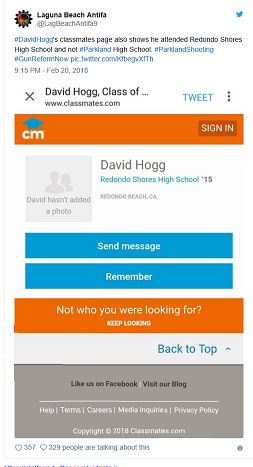 According to LaGunaBeachAntifa9 (@LagBeachAntifa9)’s profile, he or she is from “Krasnoyarsk Krai, Russia” yet the account has not been removed.  Even more suspicious is that this account which happens to be only a few days old has only one follower. (Note to self: “Unfollow Anonymous.”)

What are the odds that Twitter and Facebook have created their own bots or have secured the assistance of Progressives (Antifa?) to lure in Conservatives like lambs to the slaughter. 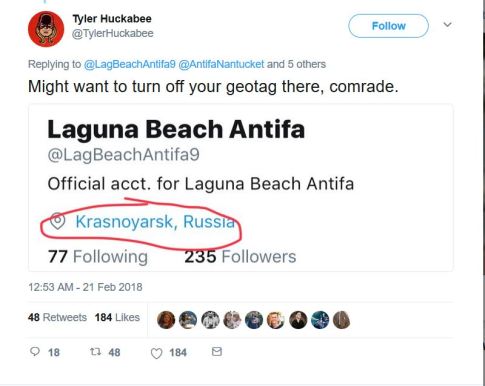 When clicking on, “Krasnoyarsk, Russia” one is immediately taken to a page containing tweets in Russian, Ukrainian and English.  Most of it appears to be spam or millennial gibberish and as I pointed out, one or two of the links lead to malware.

2. What if the existence of similar profiles is a honey pot intended to ensnare Conservative accounts that would enable Twitter to allege that these accounts violated Twitter’s rules and terms of service? The endgame of which would be to discredit, silence and ultimately purge Conservatives from Twitter. 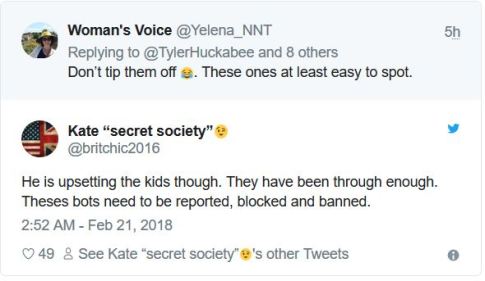 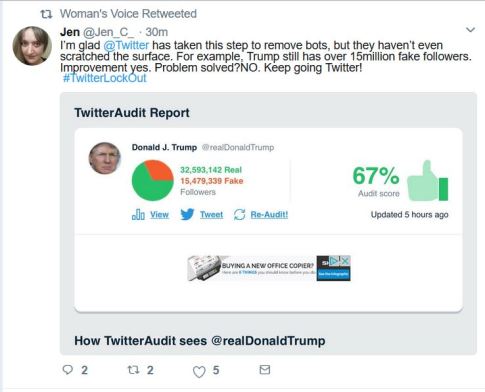