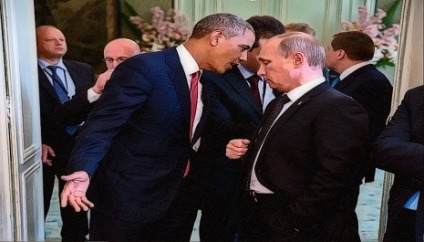 I recently watched an interview of Barack Obama in which he discussed the parallel views of reality in American politics. (It was undated, so I don’t know if it was made during his term in office or part of his post-presidency schtik, about the upheaval we’re seeing unfold in America now that Donald Trump has forced those separate realities into bolder relief.

In doing a little research on this single subject “Obama and separate realities in America” I found that this had been a common thread in many of his canned remarks, especially when acting professorial in a one-on-one sit-down.

It dawned on me that Barack Obama is exactly right.

America is divided almost down the middle by two entirely separate realities as to what comprise fundamental fact and truth. Even the most common human equation is determined by who is asserting it, them, or us. And this is no longer restricted to the low-end Twitter troll, it has entered the language of scholarship, especially in soft sciences, but also hard ones, such as climate science, where, no matter which way you lean about the bottom line, the evidentiary road to those conclusions are a minefield, not of misinformation mind you, but of separate realities, where only one can be true in a sane world, but two are clung to, the deciding factor—politics, not science.

This trend only appears recent in hard science, but it is not. What makes it appear new is the cacophony, the rising decibel level, and the curious notion that somehow high school juniors and college freshmen are entitled to equal time in venting their spleens about what “teacher” said. Now in my 70’s I have the advantage of being able to watch what was garage banter over whiskey out of a bottle in the 60s elevated to serious papers presented in symposia in the post-Clinton era, so can suggest we may be in the middle of a “quickening” where everything is about to come to a head, simply because it has to come to a head.

Frederick Hayek, in his 1963 Capitalism and the Historians, which he edited, gave some gravity to the notion that this “two-reality” phenomena has been around a longer time. The essays presented were from the late 1800s, and about the rise of the factory system in Britain. From distinguished economic historians of the era, they showed the highly distorted accounts of the social consequences of that system from Marxist historians, and the inability of the academy or political establishment to ever force a head-to-head confrontation, putting factual cards on the table side-by-side with non-facts.

That is now the norm, and carries with it a giant risk to civilization in that truth has been made captive to the political process, something the Modern Left declared to be their ultimate goal at the time of the Carter election in 1976. “Modern liberalism stands for the proposition that all human behavior shall be subject to the political process.”- Mary McGrory, via an  “Arizona Republic” op-ed. (I remember that day well, for that day was the day I ceased calling myself “liberal”.)