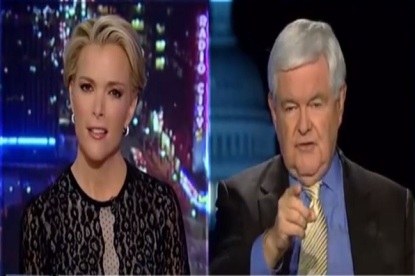 Last night on The Kelly File, former speaker of the House, Newt Gingrich went head to head with Megyn Kelly who despises Donald Trump and fell off the liberal cliff months ago.

Megyn Kelly began the segment touting left-leaning polls intentionally skewed to bring about results that would predict a Hillary Clinton landslide and Gingrich to his credit countered Megyn Kelly by pointing out the media bias and the bias of the polls.

Megyn Kelly adamant as usual continued her anti-Trump propaganda going from the polls to skipping over Clinton’s corruption straight Donald Trump is a sexual predator.  It is at this point that the discuss ion became heated (approx. 4:40 of video).  Gingrich was having none of it.

Ouch!  That is going to leave a mark.

What a performance Kelly put on last night.  Is she positioning herself for a position further up the corporate chain of Fox News in light of the speculation that Murdoch’s sons are might bring CNN’s Jeff Zucker onboard as Roger Ailes’ replacement.

As you may recall, earlier this summer Megyn Kelly and Dana Perino attended a CNN party in Philadelphia during the 2016 DNC where Kelly was spotted in the company of Zucker, if only for a few moments.

Coincidence?  A sweetener? What?  Just thinking out loud.