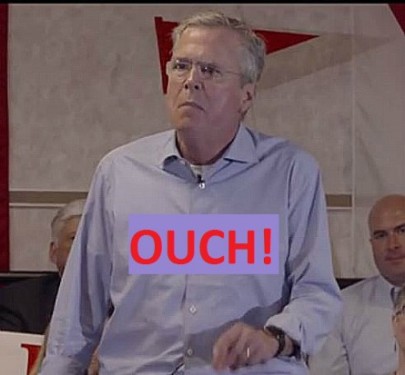 Jeb Bush’s war of words with Donald Trump sparked over Trump’s statement last week that 911 occurred on his brother George W. Bush’s watch has opened another can of worms for the 2016 presidential hopeful.

As it so happens, a dozen of the 911 jihadists/hijackers, all of whom were in the country on Visa’s obtained drivers’ licenses or state IDs through the state of Florida.

At the time of the terrorist attack, there was a warrant out for the arrest of Mohammed Atta, one of the 911 jihadists/hijackers. The warrant was ignored AGAIN under Jeb Bush’s watch.

In the days after the 2001 attacks, news broke that most of the 9/11 hijackers carried driver’s licenses or identification cards issued by Florida’s department of motor vehicles — an agency controlled by Bush and the other statewide elected officials who comprise the Florida Cabinet. Some of the licenses and ID cards were issued by the state while Bush was governor. Some of the hijackers trained for the attacks at Flight Safety International in Vero Beach, Florida. Local newspapers said the Florida licenses played a pivotal role in helping the hijackers conduct business in the United States….

In addition to the Florida ID and drivers’ licenses opening the door for the 911 hijackers, some of the hijackers received their training for the 911 Islamic terrorist attacks at “Flight Safety International in Vero Beach, Florida.”

The September 11 attacks occurring on the former governor’s watch is a swipe at Bush on both national security and immigration as well.