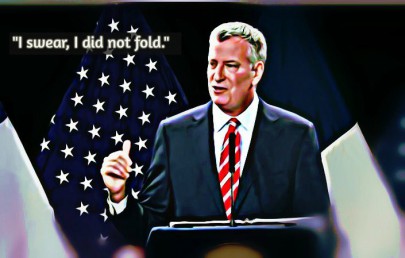 UPDATE: Late Wednesday afternoon, New York City’s Commie Mayor Bill de Blasio and his comrades over at the NYC Council in a face saving move canceled a vote scheduled for today to cap the number of vehicles operated by Uber in New York City.

Doing the bidding of big labor donors, i.e., New York Taxi Workers Alliance, the intent of the proposal up for vote would have hindered the growth of app-driven taxi services in the city.

The agreement brings a temporary end to a fractious struggle that had consumed City Hall for several days, and inundated parts of the city with mailers, phone calls, advertisements and even celebrity endorsements.

Under the agreement, according to three people familiar with the agreement, the city will conduct a four-month study on the effect of Uber and other for-hire vehicle operators on the city’s traffic and environment.

A City Council bill, which was to come to a vote as early as Thursday, had called for a cap on the company’s growth during the study. City officials said that a cap remained a possibility down the line.

The people said the agreement also called for Uber to release some of the data it had been seeking….

While the de Blasio administration is touting their momentary change of heart as a victory, a few hours earlier that Andrew Cuomo, referred to Uber as “one of these great inventions, start-ups, of this new economy. And it’s taking off like fire through dry grass….”

De Blasio administration’s response was to accuse Cuomo of “manufacturing pretexts.” However, within hours of the slap heard around the world, de Blasio folded but not before NYC’s Comptroller, Scott Stringer, joined the fray Wednesday also coming out on the side of Uber in a press release:

It makes no sense to arbitrarily cap Uber and other for-hire vehicle companies before we study the impact of congestion on the streets of New York. We need to make sure that our transportation system works for everyone, including the City’s traditional yellow cabs, for-hire drivers, and most importantly the riding public. We need to think strategically about building out our transportation networks in a way that makes long-term sense for all New Yorkers…

There you have it, Scott Stringer, another Progressive attempting to sound not so Progressive (and political) but failing.

About “the impact of congestion on the streets of New York,” why waste millions of taxpayer dollars on a bogus impact study to say what every New Yorker already knows unless one intends to put a spin on it that no one will buy? I refer you to my original post below. 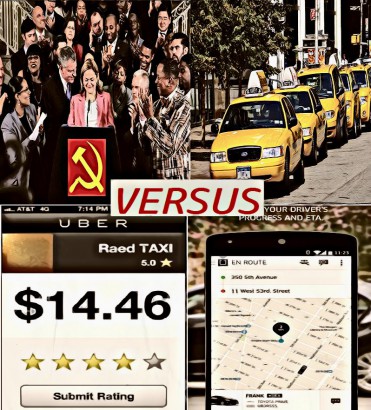 As you may have heard, New York City’s anti-capitalist “Tale of Two Cities,” Mayor Bill de Blasio and comrades at the NYC Council have declared war on app-drive taxi services such as Uber and Lyft.

Their actions is on behalf of NYC’s yellow taxicabs, the drivers of whom in 2011 merged with the AFL-CIO (ah hah!), i.e., the New York Taxi Workers Alliance.

New York Taxi Workers Alliance has a membership of 50,000 plus taxi drivers[i].

For nearly a half century and before Uber and Lyft came into existence yellow taxicabs had a monopoly on taxi service in New York City with wary New Yorkers baring the battle scars to prove it.

How Uber saved me from cab: Mayor de Blasio is leaving N.Y.ers stranded — like a black man trying to hail a taxi uptown

The news that Mayor de Blasio and the progressive clique running the City Council want to squelch the growth of the Uber car service is a sign of bad things to come for those of us who have endured decades of outrageous and illegal mistreatment at the hands of the yellow-taxi cartel.

The fancy tech-driven company and the progressives are engaging in a public war of words, with the Council and the mayor threatening to cap and essentially freeze the number of cars on the Uber platform and the company running ads slamming the pols for killing job opportunities for an estimated 10,000 people who want to become Uber drivers….

Commie Bill and the NYC Council’s war against Uber will hurt the poor and anyone else whom yellow taxicabs refuse to pick up because we are traveling to boroughs outside of Manhattan[ii].

The only time that yellow taxicabs will pick up passengers in outer boroughs traveling to Manhattan is early in the morning when the taxi drivers themselves are en route to Manhattan.

Now about that bogus impact study on congestion in the streets of NYC, one has only to point to De Blasio’s Vision Zero Action Plan but first let’s talk congestion.

The streets of Manhattan (and some avenues outside of Manhattan) remain congested almost 24/7/365 days a year. It has been that way for decades but under De Blasio’s Vision Zero, congestion is now even worse than the most pessimistic New Yorker would have dared imagine.

Courtesy of de Blasio’s utopian plan, the speed limit has been reduced throughout the city to 25 mph bringing driving here to a crawl. Adding to that is the installation of freaking bus and bike lanes now everywhere even where it is obvious that they do not belong.

Vision Zero is without argument the number one reason for congestion, aggravation amongst travelers throughout New York City and such a nightmare that I would go so far as to credit Vision Zero with the increase in traffic accidents…oh yes, and road rage.

Rather than own up to his failed policies, de Blasio, the most hated man in New York City blames Uber.

One thing is certain – every time Commie Bill acts under the guise of “leveling the playing field,” things go crashing downhill.

As a New Yorker, I have experienced the crudeness of NYC’s yellow taxi cab drivers (not all but 8 out of 10) from a woman’s perspective, the perspective of an unhyphenated American and one traveling from Manhattan to the outer boroughs in all weather conditions dating as far back as 1977 up and through March of this year.

One of my first and worst experiences occurred after having worked late one Friday night during a snowstorm.

Around 8 p.m. I left the office to go home with no idea that subway service had been terminated.

As I waited in my heels and Barney’s suit at the corner of Broadway and Exchange Place, lower Manhattan, at least fifty yellow taxis passed me by refusing to pick me up. Some stopped to pick up other passengers about a half block before they reached me while others drove past me a half block to pick up someone else.

After ninety minutes, stranded and darned near frozen, a taxi pulled up out of nowhere. The driver told me to hop in and that he would take me home.

I gave him my destination and it was then that he informed me that he had drove by 45 minutes earlier with a passenger in his car and witnessed cabs passing me by, many of whom were empty. He said that it was at that moment he made the decision once he dropped off his fare to return and if I was still trying to get a cab, pick me up.

Little did I know that night that the next four decades would bring more of the same.

My latest experience happened mid-March of this year, 4:45 am, to be exact upon exiting NYC’s Port Authority Bus Terminal, when I attempted to hail a taxi.

The driver, African (and several shades darker than me), stopped and with the rear door open after informing him of my destination pulled off as I was attempting to load my luggage into the taxi.

He veered so quickly to the left that had it been a few seconds later, I would have landed on the tar on my face.

Not to worry, God had my back. Six minutes later, I was sitting in another taxi on my way to Brooklyn. The driver a man from Ecuador who had been in the country for twenty years and had just been married the year before.

I shared my experience with the driver who at that point informed me that the African taxi driver did not want to take me because he is racist against Blacks (but I knew that….how about that one).

Yellow cabs suck and the last thing New Yorkers want is the take-down or unionization of Uber or any other app-driven taxi service, the latter of which would put us all back to square one.

Finally, taking into account that Uber is backed by Progressives should also be a warning to New Yorkers not to get one’s hopes up.

[i] NOTE: With the left hand, the New York Taxi Workers Alliance is backing Commie Bill and the New York City Council who have taken a page out of the NLRB and EPA’s playbook with their bogus “Environmental Impact Study of Growth of FHV Vehicles & Stop TLC from Issuing New Vehicle Permits During the Study Period.” (Sound familiar?)

With the right hand, they are inviting green and Uber cab drivers to join their union. A prerequisite would be the green and black Uber cars publicly conceding [my emphasis] by painting their vehicles yellow. (Are you kidding me? New Yorkers are concerned for a reason.)

[ii] At the same time, I am not too thrilled with Uber either. Several weeks ago, I used their app in an effort to ascertain taxi service from my home in Brooklyn to Mid-town Manhattan. It was on a Friday, about 2 p.m. (early rush hour in New York City). Uber came back to me with an approximate quote of “$63 to $110.” A yellow taxicab with meter running would have cost between $45 and $65. I opted to call a friend who drove me to my destination for gas in the tank.

The other side of the coin, however, is that my niece took an Uber taxi from South Ozone Park to Port Authority and it cost her only $15.

1 thought on “De Blasio Backs Down in War against Uber”