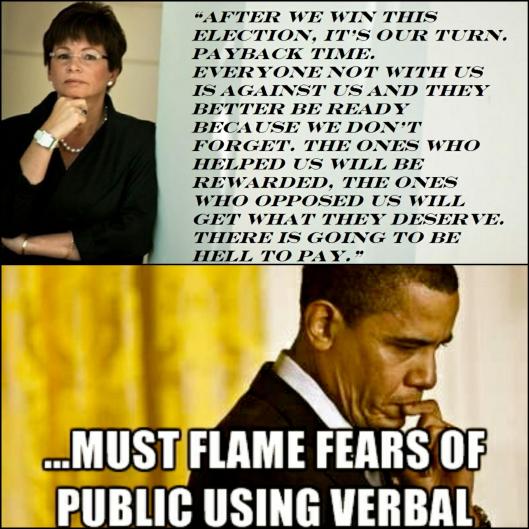 According to Ed Klein, author of “The Amateur”, a biography about Barack Terrorista Hussein Obama, slumlord and Obama sidekick, Valerie Jarrett is the architect behind the government shutdown and the rabid one’s “take-no- prisoners approach when it comes to his signature domestic policy initiative.”

Jarrett advised Obama that in the event of an effective strategically planned government shutdown, voters would blame Republicans thus enabling Progressives to take back the House in 2014 which would enable Obama to push through his immigration agenda….for starters.

…It was Jarrett who advised Obama that voters would mostly blame Republicans if the federal government ground to a halt, providing a golden opportunity to swing back control of the House to Democrats in the 2014 mid-term elections, according to Klein….

Jarrett aka the “keeper of the flame”, one who knows where the bodies are buried is also the architect of such nasty code words as “hostage”, “ransom”, “terrorists”, “suicide bombers”, “anarchists” and “jihadists” [my emphasis] concocted the scheme during late night meetings with Obama.

As pointed out by Independent Sentinel, “How did Mr. Obama have all those signs and Barry-cades ready? They are throughout the nation and the world. They are in Normandy for goodness sake!”

In yesterday’s post entitled, “Obama Escalates Inflict the Pain Campaign – USDA Orders States to Withhold November Food Stamps” I stated that the pain inflicted upon Americans in the name of Obama’s government shutdown and ideology was by design as confirmed above.

Telltale signs were everywhere that Obama’s government shutdown of a federal government famous for its delays, forcing people to wait in line for hours only to be told to return the next day, was the result of effective strategic planning.

Before Obama unleashed this strategically planned assault on all things American, including the citizens, his army of green shirts was dispatched, barrycades installed with paper signs, all at the same moment that government websites went offline.

From a government employee…

I have worked in the government on and off for 38 years. During that time I became quite familiar with requisitions, bidding, awarding contracts etc. It is a time consuming process with bean-counters and pencil-necked bureaucrats every step of the way. The simplest request takes months not days or hours.

In less than 8 hours of the shutdown, ‘miraculously’, professionally printed 3X4 foot signs appeared all over the country in the tens of thousands saying- ‘this (park, facility, etc. with custom logos) closed due to government shutdown.’
There has not been a government shutdown in 17 years. These signs were designed, specifications were determined, signs were then requisitioned, bids were posted and vetted, government contracts were awarded. The materials were then ordered and the signs manufactured then distributed by U.S. Mail or freight companies.

This shutdown was orchestrated and planned well in advance, probably at least 6-8 months ago.

Millions of tax dollars were appropriated and spent in this process. There is a paper trail a mile long leading directly to the White House.

Never in the history of the United States has the federal government been so thorough, so competent nor will it ever be again. Enter Obamacare.

The assault levied globally against American parks, memorials, landmarks and the people were swift, painful and with purpose inflicting a new wound upon the American people daily while at the same time pouring salt into already open and festering wounds.

Obama’s government shutdown was as much about inflicting pain as it was disgracing the United States before the eyes of the world.

Think of in terms of an Islamic terrorist attack (Barack Terrorista Hussein Obama, Valerie Jarrett and the Muslim Brotherhood) and solid justification for impeachment, arrest and incarceration for treason.

Our corrupt non-leader behaving like  a rabid snarling skunk with a bad attitude made daily television appearances thus, revealing to the world and zombies who were taken aback that yes, Barack Terrorista Hussein Obama is a dictator and an enemy to the United States of America.

In furtherance, the vitriol and disdain mimicked throughout the Progressive narrative propagandists and media lapdogs as if repeating the same often enough would lend credence to the lies and declaration of war against Americans desiring to be free ourselves from the grips of Communism, big government and the thugocracy that grips a nation by the throat.

If dictator Obama hoped to strike fear in the hearts of Americans, his only success was doing the exact opposite.

As Obama prances about like the victor in a prize fight, he remains delusional to the fact that by shedding his sheep cloth, Americans taken aback or not recognize the threat and in 2014 we will rectify the problem.

In 2014, the American people will act to neutralize Obama and Jarrett’s Islamic Communist regime.

Btw, where was Joe Biden during Obama’s shutdown?  Talk about keeping one’s head low.  No doubt the act of Biden distancing himself  was intentional (2016).