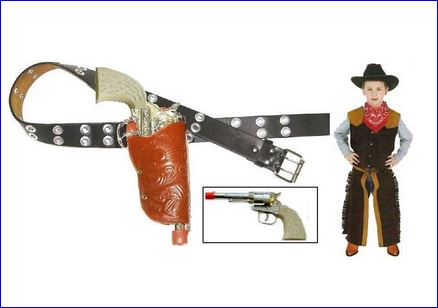 A five-year-old Maryland boy was interrogated until he wet himself and suspended for 10 days after school officials caught with playing with a ‘cowboy-style cap gun,’ the Washington Post reports, citing the child’s family and lawyer.

School officials interrogated the boy for two whole hours until he ‘uncharacteristically’ wet his pants, the boy’s mother said.

He’s ‘all bugs and frogs and cowboys,’ she said.

‘I have no problem that he had a consequence to his behavior,’ said the mother, who has requested anonymity to protect the boy’s identity.

‘What I have a problem with is the severity,’ she said…

Am I the only one who considers the actions of school officials in this case as child abuse?

…The mother was called by the principal at 10:50 a.m. and was told that her son had the cap gun and pretended to shoot someone on the bus. She said that both the kindergartner and his first-grade sister, sitting nearby on the bus, disputed that account.

Interrogating a child is unacceptable.  Doing so until he is so fearful that he soils himself is a crime and questioning him out of the presence of his parents is unethical and intentionally abusive.

The mother in this case is a high school teacher which means that her occupation will play a role in how she handles this situation.

Unfortunately such incidents are becoming business as usual in public schools across America but once again, Americans are not paying attention.

… The list of previous incidents of this nature is now so long that it has prompted Maryland Sen. J. B. Jennings to introduce a bill to stop such idiotic over reactions being played out over and over again in schools.

In March, a 7-year-old boy from Maryland was suspended for unintentionally biting his pop tart into the shape of a gun.

A third grader in Michigan was reprimanded by school officials when he brought a cupcake to school with a plastic toy soldier, holding a gun, on top of it.

A ten year old Virginia boy who was arrested for taking a plastic toy gun to school was forced to deal with a potentially permanent criminal record over the incident….

There is a war on against parents for the body, souls and minds of our children.  Moreover, there is a war on little boys by Marxist elites who will not hesitate to traumatize our children into a state of compliance, although they would not quite put it that way.