In the video, one actually witnesses the wolf pack working itself into a rabid frenzy.In the first video, one witnesses the huge crowd of union slugs surrounding the Americans for Prosperity tent at today’s protest in Lansing Michigan just prior to the destruction of the tent, which at the time of destruction was fully OCCUPIED.

Toward the end of the video, protesters can be heard shouting, “This is our house. Our house.  Our house.”

I beg to differ.  We are living in the United States of America, which is the land of the free for all.

WARNING: What you will see and hear in the videos below leaves much to be desired and is not for the faint of heart.

The following video is several minutes long but it displays union thuggery at its nastiest.

The following video is another view of the assault from the outside of the tent.

Numerous union marshals (yellow vests) and captains (orange vests) were assigned by the unions to the Lansing, Michigan protest supposedly to prevent the chaos that erupted today in their presence.

Note that although present, these so-called marshals turning a blind eye failing to come to the rescue of those in the AFP tent and Steven Crowder who was assaulted and sucker punched four times by union thugs.  Even more egregious is that there were no witnesses. 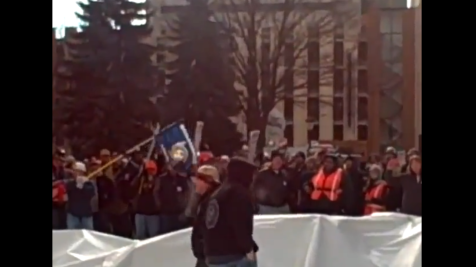